Breaking up in mutual agreement

Breaking up a relationship almost always leads to at least one of the parts getting sad, angry and left out. Even though it is possible to agree to break up and to take the decision mutually, there will always be one whom it hits a little harder than the other.

Trust me, I know the feeling. Several years ago, I went deep down into a hole after my girl at the time, Rebecca, and I broke up on a mutual agreement.

We both wanted it, but when I look back, the biggest reason that I did so was to not look weak and needy in her eyes when we discussed it – which in turn was exactly what I did when I weeks later sent her texts saying I wanted her back. That didn’t work out too well, since first of all, she had already begun dating another guy.

I can’t tell you how many times I have kicked myself over this episode. If I had simply manned up at the time and told her that we should work out our quirks instead of breaking up…

I guess that it is wired into our bodies in some way – there’s no way I am going to feel the same regret and emptiness as I did after Rebecca and I broke up again. I just can’t let it happen.

And I won’t let it happen to you, either.

If you and your girl have talked about breaking up, my best and most important advice is to really listen to your heart for what you want. With Rebecca, I didn’t listen to anything but my ego, which taught me a humiliating and painful lesson.

Listen to your heart

Listening to one’s heart is not easy, and it takes a lot of practice to become good at it. But in the end, it pays to familiarize yourself with your most hidden thoughts and feelings.

Don’t make the same mistake I did by acting on some thoughts that I thought was me, but actually wasn’t.

I see the ego as a part of every human being as natural a part of you as everything else. It sits inside you, somewhere, and lets you know what it thinks about everything, all day long. It is the ego that judges both you and others, and it is the ego that makes you do ”selfish” things.

Learning to listen to the ego without acting on its advice is the first step to becoming familiar with your heart. Your heart is the almost exact opposite of your ego: it is filled with nothing but love and pure intentions.

I think that Walt Disney illustrated it pretty damn well with the red devil on one shoulder, and the white angel on the other. The two discuss matters all day long, and it is in part which of them you listen to the most that decides your way through life. 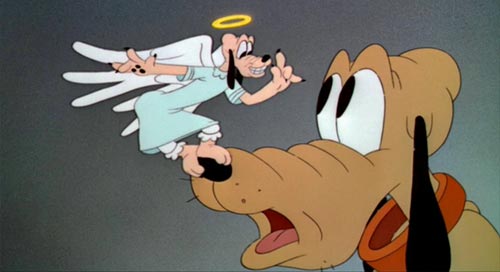 Every time you get a thought in your head that encourages you to act in some way, try to identify where it comes from. The key here is awareness.

Think about these things when a thought pops up, and try to identify the answers. There is no right or wrong here.

Let us take an example:

You’re sitting with an ice cream, let’s just say that it is your absolute favourite ice cream, and a good friend of yours asks if he or she can taste it.

A classic response stemming from the ego would be repulsion or an aggressive response. If you tell your friend no, what you accomplish is merely ”more for yourself”, at least in the short run.

The ego always wants more, more of everything. It places your own needs in front of the needs of others.

The thought of giving your friend a taste of your delicious ice cream is on the other hand a thought from your heart. It serves to magnify love, and to create harmony in your immediate surroundings.

Of course you can give him or her a taste, simply to get something in return or to make that person ”owe” you something. If that’s the case, then it’s by no means from the heart. Only the purest intentions come from the heart.

Learning to identify your thoughts like this can help you not only to overcome your ego, but also to act more lovingly and more giving.

The pragmatic way to look at it

Living from your heart can also be viewed in a more pragmatic sense. By giving your all to the people around you, they will see you as a loving person, and in return you will gain more love.

This is the ego’s way of seeing it, but whenever your actions resonate with your heart, you have my accept for doing it anyway.

Giving, especially in the beginning, can be very difficult, and that’s the reason why I ”allow” this kind of behaviour. If you give money to charity, not to help the cause you’re donating to, but to reap personal benefits in one way or the other, that is still ”better” than to restrain from donating or to not give anything at all.

Breaking up on a mutual agreement

To bring it back to my original point: whether or not to break up with your girlfriend on mutual terms or to fight for the relationship can be broken down into a simple question: are you taking a decision from the ego, or from the heart?

Breaking up, from the ego:

Breaking up, from the heart:

The list concludes this post. Deciding to break up, together, is often the best and most honest way to break up. But if what is being said doesn’t come from the heart, there’s a big chance that either you or your partner will end up getting more hurt than necessary. Take the decision from the heart, and from there, you will know what to do.

And by the way, I am aware of the fact that the “How to get over your ex-girlfriend” is down. It is because it has too many comments, and therefore takes too long for the server to load. I am working on a fix, but perhaps you have to be a little bit patient, since I am not near a stable internet connection these days… I can’t even link to Google’s cached version, since they have taken it down due to the downtime. Sorry guys, I work as hard as I can on the problem!
Alex