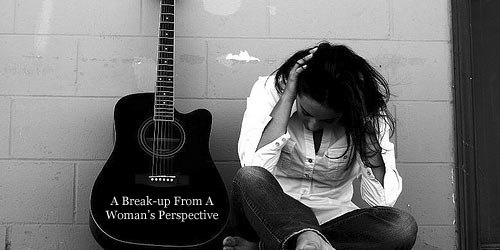 Break up from a woman's perspective

Note from Alex: Today Katie will share a story on a break-up and a little lesson on how not to break-up….

There is a well-known episode of “Sex and the City” where the current boyfriend of Carrie Bradshaw (played by Sarah Jessica Parker) gets dumped by her boyfriend via a Post-It note. One minute he’s there in her bed and everything is seemingly fine, and the next morning he is gone replaced with the lone post-it note offering some lame excuse about not being able to do this anymore. The reason this particular episode sends shivers of fear down the backs of women everywhere is that it rings true. How many of us have been down that road before?

Nobody likes confrontation.  And it was always very amusing to me when my ex-boyfriend used to tell me he hated confrontation.  I think there’s a difference between confrontation and communication.  I’m all for communication and when things aren’t running smoothly in a relationship, obviously communication is essential.  My ex didn’t break up with me via a post-it note, but he did do something which in my opinion was just as cowardly.  My break-up came in an email message.

It wouldn’t have been such a harsh blow if I had realized he was unhappy or there were problems.  Certainly we had issues in the past as every couple inevitably does, but we were always able to work things out by talking and communicating with one another face-to-face.  When everything is going seemingly well, you never expect to receive one of those “Dear Jane” emails.  I thought we were doing okay, back on track, working together for the common good and all that jazz.  I am not a mind reader and I had no idea he wanted out. Until I received that dreaded email…

“Dear Katie, I am ending our relationship.  I’m no longer happy with the way things are going.  We had some good times together but it’s time to move on now.  I’m sorry things didn’t work out.”

And that was that.  I was blind-sided.  And I had no choice in the matter.  He had decided things between us were over and it was done.  Needless to say I wracked my brain trying to figure out where it had gone wrong.  We had seen each other the day before and there was no trace of the impending storm approaching.  He had been jovial, affectionate and I had no idea he was about to drop this bomb.  In an email!

It’s a horrible feeling when you have no control over a situation, especially when you never saw it coming. After my initial shock wore off, I phoned him, but he meticulously avoided all my calls and proved once again that he was a coward.  After almost two years together, I expected a little more grace in the final days of our relationship.  But obviously he wanted to avoid the drama, the confrontation, and of course the inevitable show of emotion and tears.  He couldn’t handle it.  So he slunk away like a thief in the night by removing himself from any responsibility to end things like a gentleman.

Breaking up is hard enough all on its own.  And no one wants to be the bad guy by telling their partner it’s over.  But taking the easy way out by texting or emailing is simply not the right thing to do, especially if the two of you have been together for awhile.  If you want out of your relationship, step up to the plate, take responsibility and tell your partner to their face.  You can do it as gently as possible; it’s going to hurt no matter what.  But at the end of the day, your ex will have more respect for you if you end things civilly and not with some tossed-off message sent through cyber space.

Katie Michaels is a veteran of dating online, and her advice is sought after by friends and strangers alike. You can read more of her advice at her blog, Dating Online!

Thanks to the image by xlordashx.